Today I promised to show my daughter some new features that I've added to Turtle Roy lately. So we started with the new text function. First on the paper and then in Turtle Roy:

Once again, I had to remind that the text must be surrounded with quotes. It's actually quite hard to explain why some things need quotes and some don't, when you're explaining to a 4-year-old. Even though she turns 5 in a few days. Fortunately the concept of surrounding with quotes is now familiar and she's also got mad line-editing skills so stuff happens quite quickly now. Except when we get sidetracked, which we do often.

Before the lesson I had flashed her a very nice trick and she wanted to do the same. That is, draw some text repeatedly in a different angle with different colors. I used pen and paper to illustrate how the desired effect can be achieved. Like this. 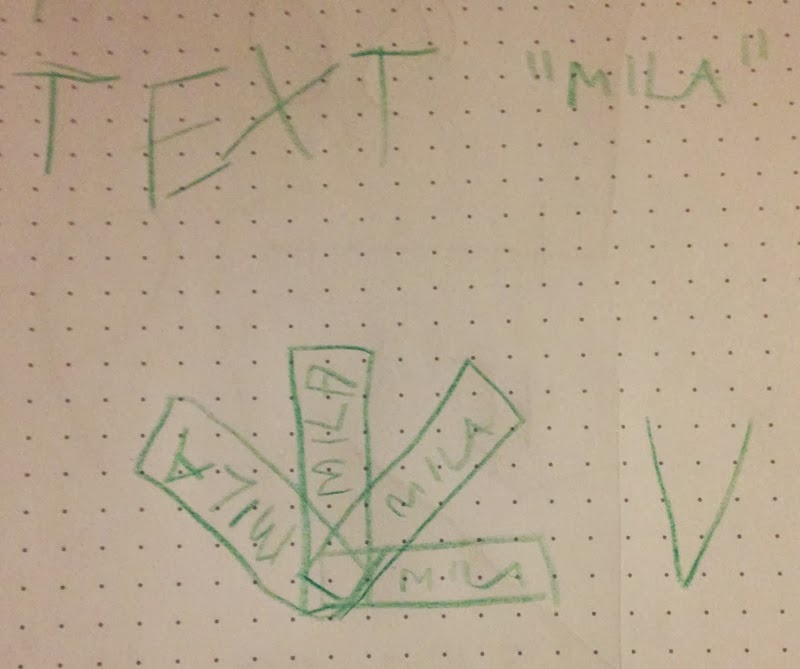 Then we discussed, once again, how do we make the computer do like "first draw some text and then turn right 45 degrees". By sequencing, of course! We we had this established, she was on the task.

This took like 15 minutes because we went into discussions about the usage of the CAPSLOCK key and how different angles look like and are written. The result was quite cool and she repeated it many a time (8 times to be precise). Then it was COLOR TIME! Not hard to guess which color she picked.

Once again, the quotes. Before she started repeating the previous sequence 8 times, I suggested that we should create these "text flowers" all around the screen with different colors. And now it seemed like a good idea to use the repeat function to avoid manual repetion. So, we edited our command a bit:

It was nice to notice, once again, that line editing and surrounding things with parentheses is no longer an issue. This was easy! And the result was stunning. Her name written like a PINK FLOWER!!! 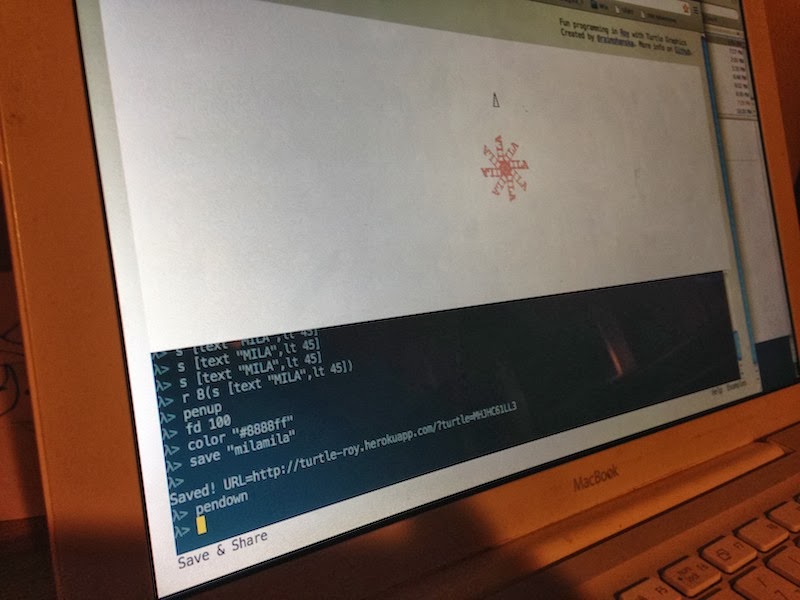 We moved 100 pixels up with the turle pen up (using penup, fd 100, pendown), then defined a new function like this:

And now drawing another flower, in light blue (#8888ff) was just an issue of

And that was it! Basically we went through the basic programming concepts of repetion, sequencing and functions again, with different examples and had fun. You can have a look at the final program in Turtle Roy here.