Today she was totally against the idea of having a lesson. So we decided to discuss our goals instead. What do you want to learn to do? She drew a snowmanlike figure on the paper and told me she'd like to be able to draw the same thing with Turtle Roy.

Then we discussed geometry. How many degrees in a circle? Agreed on 360 and that it's a big number. Practised writing it. Then discussed the priciple of drawing a circle with a computer: go forward just a notch, then turn left a notch. Repeat until done.

To my surprise she wanted her snowman to be made of hexagons instead. How to do that? What are the angles of the vertices? Back to basic arithmetics then. What if you had 4 wieners and had to split them for 2 people. She solved that just fine. Then I wrote down

And explained that when you divide 4 by 2, you write it down like this and the computer will be able to solve the problem for you. So, if you want to know the angles in a hexagon, you're gonna have to split the full circle (360) into 6 equivalent parts. We practiced writing

On the paper. Then she wanted to know the answer and "asked the computer". She was quite sure though that a decagon does not exist. I told here that anygon is in fact reality, i.e. you can draw a polygon with an arbitrary number of equivalent vertices. We agreed to create a program for drawing a polygon with any number of vertices tomorrow. That, in fact, is a great exercise in programming!

Then, on her request, we click on all of my bookmarks (we used my computer this time) and I explained what they do. Google Maps was especially interesting. We discussed continents, countries, borders and such. Now she knows that Richard is in fact from Africa, because Cameroon is a part of it. I guess she's starting to grasp the notions of country and continent. 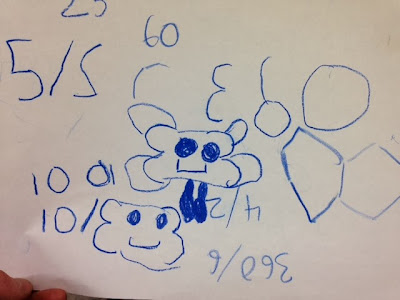