Today we learned some threading. Threading is an advanced programming concept where the computer runs your code in multiple threads meaning that it actually does multiple things at the same time. It is known to cause headache to even the most advanced developers.

In our case, we learned all there's to know about threading the Husqvarna Viking Emerald 122 by watching a YouTube video.

This is how it looks when it's properly done. 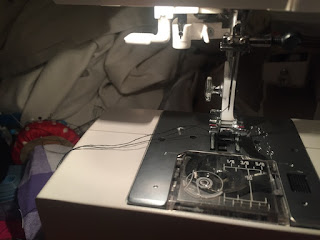 I have to admit though that I would still be perfectly helpless if I had to do all by myself and would have to resort to the same YouTube video again. Luckily my daughter is up to the task now and is working on a miniature backpack for her teddy bear.

We also discussed our Unity learning project briefly and concluded that the "intermediate" roguelike tutorial is too hardcore for us and we'll have to find something a bit easier to work on. I have a feeling that it'll take a while before we'll talk about threading of the computing variety.

EDIT: You're probably dying for a great Threading Tutorial, so here's one!
Posted by Juha Paananen at 9:13 AM No comments:

Lately we've been going though the Unity 2D Roguelike Tutorial with my now 8-year old daughter who taught her mom to use Vim at the age of 4.

Well, it seems we picked the wrong tutorial... Not saying we're not learning though. It's just that the code that gets casually written there's like protected virtual voids:

... freaking hardcode object-oriented stuff! The kid is a brave one but come on, we're writing abstract behavior component classes that have virtual parameterized methods. Also, in some parts of the tutorial (like this one) nothing new gets added to the game, in the sense that you could actually see some results on the screen.

There are easy and fun parts too, like working with the Animator Controllers, and in these parts she gets engaged but in the hardcore coding parts we've now agreed that I do most of the work. And it's totally ok! For me, this is nice and easy, and I get to understand how Unity works. I just hope that she'll bear with me for the whole tutorial without getting totally frustrated with the protected virtual voids.

I was just about to rant that there are no easy 2D Unity Tutorials but ahem there seems to be at least this one: 2D Game Creation.

Now, should we abandon our work and switch to the easier tutorial?! Maybe I'll quickly skim through both myself and make the decision. Let see...

Coding in the Mediterranean

The weather in Finland at this time of year is not so nice. I wish we could transport Finland to the Mediterranean for the months of September to November. Until then, I'll have to tranport just my family there every now and then... 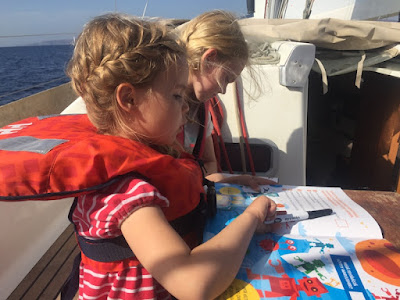 This is how we learn coding in the optimum learning environment, using my pretty new book Koodauspuuhat which comes with an erasable marker! Only in Finnish though, at the moment.

Posted by Juha Paananen at 4:33 AM No comments:

Today we started on the Writing the Board Manager part of the Unity 2D tutorial. This is the first part of the video tutorial that involves actual coding. And some code there is! Defining inner classes, methods, tons of variables, nested for loops etc.

I no longer wonder why this tutorial is not Beginner but Intermediate level :) We wrote quite a bunch of code of which I understood 100% and she maybe 20% or so. But no worries, we'll keep on coding and make something fun. Understanding how it actually works comes second, hopefully. 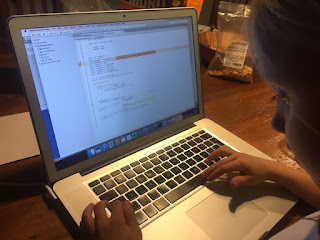 This reminds me of my own learning days when I was about her age and learnt coding from the Commodore Vic 20 Manual. Like this: 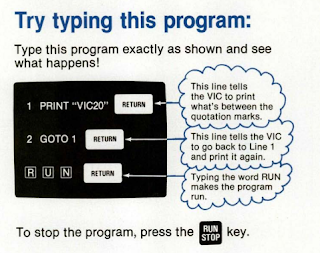 There were tons of simple and progressively less simple computer programs that I just typed like they were written on the book. I had no idea what the program code meant but I just typed it anyway. And it was so exciting to finally type

.. and see what happened! Then I started slightly modifiying the ready made programs and finally started to understand the code by the effect that my little changes had on the outcome.

So, I hope she can also learn that way. And I'm actually 100% sure it's all about motivation and repetion. If she has the motivaion, she'll learn.

Oh, and we found this mushroom on our backyard: 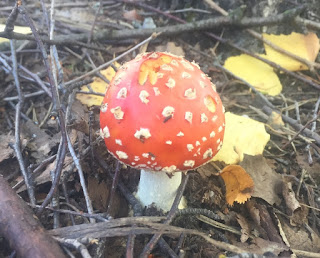 Should we eat it, yes? While driving to her football match she asked me what these mushrooms actually do to people. I told her that it does something to your brain and you'll see funny things. And if you eat too much you'll die. Immediately regretted mentioning the hallucinations. Had to make extra sure that experimentation is out of the question in case more information of the effects is needed.
Posted by Juha Paananen at 9:57 AM No comments:

Our second session was successful, yet super short. We finished the animations tutorial video and managed to create something called an Animation Override Controller. It's used when you create multiple enemies which share the same state machine but have different animation frames. Cool, huh? At that point the urge to start creating cupcakes instead was unstoppable and cupcake time it was. 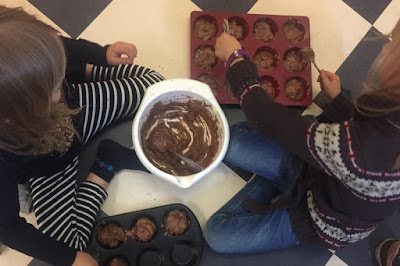 Today she wanted to continue the tutorials so we sped through the next tutorial video on making prefabs for game tiles like floor, walls and food. These "prefabs" are saved object that define how a tile (a static piece in the game) look and how it interacts with its environment. Like, can you walk on it or not.

The stuff we've done so far has contained lots of repetitive works (like making 8 different floor tiles in the exact same way) which is kinda tiresome for people like me, but has proven rewarding for my 8-year old who has learnt to take these steps like a pro, just by repeating them over and over again. She can now make a lot of prefabs in the blink of an eye!

At this point I guess we have now set up all the assets so that we can start programming. Can't wait! On the other hand I'm a bit concerned how she'll handle C#, which is the first object-oriented programming language she's ever touched. There's bound to be a lot of weird boilerplate around, but I hope it won't matter too much. It's all about motivation.
Posted by Juha Paananen at 12:02 PM No comments:

I realised that we've started quite a few game projects before, which have all been abandoned at a very early stage. But this time we're gonna make it. I just know it :)

Ok, so we've started working on a Unity 2D Tutorial where we follow video instructions and try to do the same thing as the guy on the video. The idea is to create a simple 2-dimensional game with the Unity game engine. I hope that after we're done with the tutorial videos, we'll be well equipped to start writing games of our own. So far, I have very limited Unity experience and I need the video tutorial as much as my daughter, so this'll be a great learning experience for both of us. My advantage over her is that I'm a professional coder at Reaktor (yes, we're hiring in Amsterdam, Dubai, Helsinki, New York, Tokyo and Turku!). Her advantage is that she's young, smart and has an almost unlimited supply of free time to throw at the project.

We had our first session the day before yesterday and we had a good time. We managed to create some basic animations for the player character and a couple of enemies. 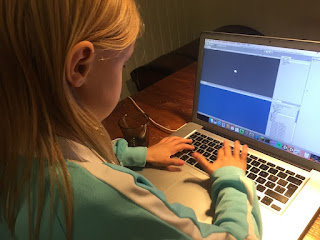 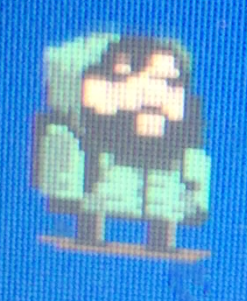 After creating a couple of animations from the sprite sheet (basically a set of images) included in the tutorial, she was able to complete the rest by herself. After the one-hour session, she seemed quite enthusiastic about going on but it was bed time. I'm pretty sure we'll continue this soon. Stay tuned :)
Posted by Juha Paananen at 11:09 PM No comments:

A couple of days ago my daughter announced that she wants to create games that run on her phone. REAL games. I tried to steer her back towards Scratch and the like but she was adamant that those won't do, as she's about to start making real games.

DAD: It's going to be really really hard and you'll be banging your head against walls for hours trying to make something work"
GIRL: That's exactly what I want!

She described a pretty complex game to me, containing several minigames and a main story. Then she showed me some graphics that she's drawn on paper. Fortunately I got her to understand that she needs to start with something smaller first, before creating her masterpiece.

When she went to sleep, I started digging, knowing fully well that I'm not a game programmer and need to do some catching-up before I can help her in her endeavours. I downloaded Unity and made a good start of a Pong-like ball game. It was surprisingly fun and easy, so I guess we're gonna go on with Unity.

Today we did the first few clicks of the 2D Roguelike tutorial before it was bedtime. Fun times ahead!
Posted by Juha Paananen at 10:50 AM 1 comment: